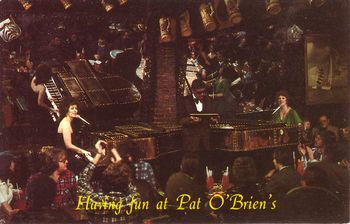 History is being written with the help of the ladies that started pianobars.

History is continually being written with the help of the women that paved the way for those of us rocking piano bars today.

A piano bar (also known as a piano lounge) consists of a piano or electronic keyboard played by a professional musician, located in a cocktail lounge, bar, hotel lobby, office building lobby, restaurant, or on a cruise ship. Usually, the pianist receives a small salary plus tips in a jar or basket on or near the piano, especially from patrons requesting a song traditionally written on a beverage napkin.[1] Some piano bars feature a baby grand or grand piano surrounded by stools for patrons (or, somewhat humorously, an upright piano or digital piano encased by a cabinet resembling a grand piano). Others have a bar surrounding the piano or keyboard.

“A piano bar is a hybrid creature: part performance space, part living room, part cruise-a-thon, and part saloon. The bar is there to sell drinks, the pianist is there to perform, and the crowd is there to sing, listen, drink and socialize. All of this means that it's impossible to predict what a given evening's chemistry will be, even if most of the people on hand are regular customers.... While every factor counts, the most important issue is the person at the piano. The pianist determines the type of music, the style of performance, and the general tone of the evening.... The experienced piano bar player knows how to take genial control of most any situation and generally keep the party going.”

The American minimalist composer Terry Riley, who worked as a cocktail pianist when younger, later offered this "religious" view of the profession:

“Having worked for years as a lounge lizard, I was smitten with the insight that the cocktail pianist is signaled out to conduct his ritual of group urban chanting on the themes of love and existence—a kind of medicine man at the ever-present altaric piano, surrounded by his boozy tribe sipping sacraments in the circle of our common misery.”

Instrumental only: the professional piano/keyboard player plays strictly instrumental music, which is usually classical, jazz, or easy listening; this type of piano bar is often found in hotel lobby lounges or fine dining restaurants and upscale bars.
Only the musician sings: the professional piano/keyboard player sings to his/her accompaniment, usually on microphone, but no other singers are generally allowed.[5] Examples include Carousel Piano Bar & Lounge.
Musician and waiters sing: the professional musician sings and also invites waiters to sing solos.
Sing-along: patrons surrounding the piano/keyboard sing as a group, usually without microphones, often preferring standards, show tunes, pop and rock. It is "a social venue for singing".
Examples include Marie's Crisis Cafe and The Duplex in Greenwich Village.
Dueling pianos: usually on stage with two grand pianos, each played by a professional player who sings and entertains; humor and audience participation are prevalent. Usually these types of piano bars have substantial sound systems, and most of the songs performed are rock and roll, classic rock, Top 40, R&B or country, sometimes played by request. The format is based on dueling piano entertainments offered at Pat O'Brien's Bar in New Orleans, Louisiana. Numerous popular clubs offer the sing-along format, while Howl at the Moon Piano Bar, Shake Rattle & Roll Dueling Pianos (in New York City) and The Big Bang Dueling Piano Bar feature full performance shows, often with singing and dancing by their wait staff.
Open mic: individual patrons sing (on microphone) to the accompaniment of the professional musician; in some ways, this type of piano bar is like karaoke, except that the music is live and dynamic, and there are usually no lyrics available (although some piano bar players do supply some lyrics); like karaoke, the songs performed may cover a wide, eclectic range (show tunes, standards from the 1920s forward, jazz, country, R&B, rock'n'roll, blues, folk, soul, disco, hip-hop, etc.); the patron singers are usually called to the microphone in a rotating order; often, each singer is allowed 2 or 3 songs each time he/she is called to perform. The Alley in Oakland, California, uses this format.
Combination: some piano bars include the characteristics of two or more of the above, either on different nights or combined on the same night.
"One-man band": The musician uses an electronic keyboard equipped with built-in accompaniment function and music sequencers to emulate the sounds of a live band, usually in MIDI format. It is mainly popular in Europe and Asia, often playing regional popular music.

Dueling Pianos (also known simply as "sing-along") is a form of entertainment, usually on stage with two grand pianos, each played by a professional player who sings and entertains; humor and audience participation are prevalent. Usually these types of piano bars have substantial sound systems, and most of the songs performed are rock and roll, "classic rock", Top 40, R&B, or country, played primarily by request. The modern format originated in late 1986 at Alley Cats in Dallas, Texas, and was based on the old-style dueling pianos still found at Pat O'Brien's Bar in New Orleans.

Literal dueling pianos can be verified as early as the late 1890s, when ragtime piano players would actually "duel" in an effort to see who could play better and faster. In 1933, when B.H. O'Brien and Charlie Cantrell opened Pat O'Brien's Bar in New Orleans, they included a room where two piano players would entertain the crowd on copper-topped baby grand pianos. Players would take turns singing songs requested by the audience, written on cocktail napkins.[1]

In 1986, a piano bar called Dallas Alley (aka "Alley Cats") opened in Dallas, Texas as an attempt to copy the piano bar style of New Orleans.[2] Players at this club started redefining the style of dueling pianos by playing more contemporary rock and roll music, coupled with humorous bits that involved lyric substitutions and audience participation. These "bits" would become commonplace at many dueling piano clubs over the years, as a staple of the industry. From there, many dueling piano clubs and chains opened, and there are currently well over 200 different clubs across the United States, and even more in other countries.[1] The name of the concept has also evolved to be called "sing-along" since the goal of the players is not generally to work against each other, but rather to gain audience participation with singing and clapping. This is widely accepted as the current incarnation of dueling pianos/sing-along.

A typical dueling pianos show normally features two to four piano players. They work in teams throughout the night, taking audience requested songs. Generally, tips are expected when a song request is made, and priority may be given to a song with a larger denomination bill. Upon a tip, the players will often play the fight song of whatever college is requested too, which often results in bidding wars between alumni and students of various universities in attendance. Patrons can also request that an audience member be brought on stage. Generally, this is to celebrate a birthday, bachelorette party, bachelor party, anniversary, or other occasion. The player then performs a "calldown" in which the participant (or participants) is embarrassed in a light-hearted fashion. Calldowns may be parodies of well known songs, or simply original material intended to generate a reaction from the audience.[3]

"Bits" are comedic routines or audience participation, many woven in the songs themselves. A commonly used bit can be found in the song "Joy to the World", by Three Dog Night, as one piano player will teach the crowd "sign language" that accompanies the song, then bringing up an audience member to demonstrate.

Video Example of Dueling Pianos, "The Devil Went Down to Georgia"

Commonly requested songs at a dueling piano bar can include almost any genre, and are generally accompanied by a monetary tip.

Many of the songs requested do not fall into the typical "piano bar" category, and many dueling piano players pride themselves on their ability to perform songs that are generally not considered as such, like those from hard rock and rap genres.

There are currently 191 members of the Facebook Female Duelers Group and 978 members of the Dueling Piano Players group as of this writing. I think it’s safe to say that piano bars in multiple styles are not going out of fashion anytime soon. Adaptability and versatility, coupled with talented performers and stellar support staff make this concept a lucrative business; and a decidedly fun place to work!